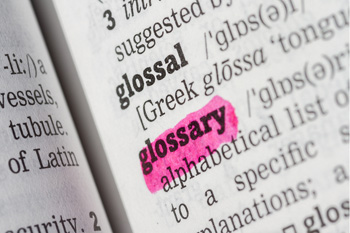 90/10 Load: An annual forecast of the state’s peak electric demand (load) where there is a 10-percent chance that the actual system peak load will exceed the forecasted value in any given year or, stated another way, it is expected that on the average the forecast will be exceeded once every ten years.

affected utility: Affected utilities are those whose systems cause, contribute to or would experience an impact from a reliability issue.

angle: Used to measure the synchronism between different alternating quantities, such as voltage or current. It is often an important performance measure; it is measured in degrees.

baseload: A baseload power plant is an electric generation plant that is expected to operate in most hours of the year.

blackout: A total loss of power over an area; usually caused by the failure of electrical equipment on the power system.

breaker-and-a-half: A substation design that offers advantages such as ensuring that the failure of any one circuit breaker will not interrupt power for more than a brief time. The designs also allow parts of the substation to be de-energized for maintenance and repairs without causing a power interruption.

brownout: Abnormally low voltage that causes voltage-sensitive equipment such as computers, motors and certain types of lighting to have degraded or interrupted performance.

bus: Also referred to as a “node” or a “station” or a “substation.” A common connection point for two or more electrical components, such as a transformer, a generator.

capability: The capacity of a piece of equipment to perform its intended function, such as carrying current for a conductor or transformer, or interrupting current for a switch or breaker, or supplying power for a generator. Certain pieces of equipment can have different capabilities based on certain factors, such as ambient conditions (temperature, wind) and the amount of time the equipment is expected to perform the intended function. Typically, a Normal rating or capability is nearly continuous, and an Emergency capability is a higher capability utilized during infrequent events for a short duration, typically twelve hours or less.

capacitor: A device that stores an electrical charge and is typically used to address low voltage issues on a power system.

conductor: Part of a transmission or distribution line that actually carries the electricity; in other words, the wire itself. The wire or conductor is just one part of a transmission line; other parts include the poles and the insulators from which the conductor is hung. A conductor must have enough capacity to carry the highest demand that it will experience, or it could overheat and fail.

contingency: An unplanned event creating an outage of a critical system component such as a transmission line, transformer, or generator.

converge: Power flow programs use an iterative mathematical process to solve for, or converge to, the solution of unknown system parameters, such as Voltage and Angle. When the mathematics do not result in a solution, the iterative process has “failed to solve” or “failed to converge” to a solution. This result is an indication of voltage collapse or loss of load.

demand: The amount of electricity being used at any given moment by a single customer, or by a group of customers. The total demand on a given system is the sum of all of the individual demands on that system occurring at the same moment. The peak demand is the highest demand occurring within a given span of time, usually a season or a year. The peak demand that a transmission or distribution system must carry sets the minimum requirement for its capacity (see also the definition for energy).

demand-side management (DSM): A set of measures utilized to reduce energy consumption. Energy conservation is one kind of DSM.

dispatch: As a verb: turning on or off, or setting the value or output of a generator, a capacitor bank, reactor or transformer setting. As a noun: the state or status of these devices.

distribution utility: A utility in the state of Vermont that is responsible for owning, operating, and maintain the distribution part of the electric system within an area.

easement: A right to use another’s land for a specific purpose, such as to cross the land with transmission lines.

fault: The failure of a line, transformer, or other electrical component. Once such a component has failed (due to overheating, short-circuiting, physical breakage, or other trauma) it is automatically taken out of operation by a circuit breaker that quickly turns the component off. Once it has been “tripped off” it no longer poses a threat to human safety, but its loss may present a difficult burden to the remaining system (see also the definition of redundant below).

forward capacity market: A marketplace operated by ISO-NE using an auction system with a goal of purchasing sufficient power capacity for reliable system operation for a future year at competitive prices where all resources, both new and existing, can participate.

generation or generator: A device that converts mechanical power from an engine, a water wheel, a windmill, or other source, into electrical power.

kilowatt-hour (kWh): One thousand watt-hours. A watt-hour is a measure of the amount of electric energy generated or consumed in a given period of time.

kilovolt (kV): One thousand volts. Volts and kilovolts are measures of voltage. lead distribution utility -A utility selected by the affected utilities to facilitate decision-making and to lead the effort to conduct the NTA analysis.

lead distribution utility: A utility selected by the affected utilities to facilitate decision-making and to lead the effort to conduct NTA analysis.

load shedding: Intentionally turning off power to a customer or group of customers, usually for reliability reasons such as to avoid a blackout or equipment damage.

megawatt (MW): One million watts. Watts and megawatts are measures of power. To put this in perspective, the peak power demand for the New England region is approaching 30,000 MW or 30,000,000,000 (thirty billion) watts.

N-0 or N-1 or N-1-1: The term N minus zero (or one or two) refers to the failure of important equipment. Although these terms sound complex, they are actually quite simple. “N” is the total number of components that the system relies on to operate properly. The number subtracted from N is the number of components that fail in a given scenario. Therefore, N-0 means that no components have failed and the system is in a normal condition. N-1 means that only one component has failed. N-1-1 means that two components have failed, which is generally worse than having only one fail (see also the definition of contingency above).

out of angle: See phase shifter.

per unit (pu): The ratio of an actual or measured quantity to the base or reference value of the same quantity. For example, a 0.9 pu voltage on a 100 kV system represents a 90 kV measurement of the voltage.

power: The amount of electricity that is consumed (demand) or supplied at any given time.

power factor: A measure of the amount of reactive power (by-product of alternating current, i.e., AC) in relation to the real power (component of power that can heat).

reactive reinforcement: Also referred to as “reactive compensation.” The act of adding a capacitor bank or shunt reactor to increase or reduce voltage.

reactor: A device that stores energy in the form of a magnetic field, and then uses this energy to induce current. Typically used to address high voltage issues on a power system.

reliability deficiency: An existing or projected future violation, before or after a contingency, of the applicable planning, design and/or operating criteria, with consideration given to the reliability and availability of the individual system elements.

right of way (ROW): The long strip of property on which a transmission line is built. It may be owned by the utility or it may be an easement.

sensitivity studies: A technique of analysis whereby different values of certain key variables such as the permanent loss of a generation or transmission resource are tested to see how sensitive study results are to possible change in assumptions.

shoulder load: A load level that is within some band width over and above 80% of the peak load level.

steady state: Refers to the period of time after all momentary network disturbances and automatic equipment adjustments have ended.

substation: A substation is a fenced-in area where several generators, transmission and/or distribution lines come together and are connected by various other equipment for purposes of switching, metering, or adjusting voltage by using transformers.

subtransmission: Subtransmission lines are power lines that typically operate at a voltage of 34,000 to 70,000 volts and are generally below 100 kV.

voltage collapse: A phenomenon whereby a series of events ultimately results in a blackout after a certain amount of time ranging from seconds to minutes.

voltage instability: A phenomenon whereby system operators cannot maintain acceptable system voltage given the tools at their disposal for a specific combination of load, generation and transmission. Voltage collapse may ensue.